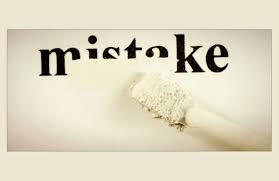 Some argue that we only learn when we make mistakes. There are many quotes about such a thing but as a society, there is still a stigma around making mistakes. Especially in the workplace. So, is it good to make a mistake? Or does it have the potential to hurt your employment?

Therefore, I think we should take on the mentality that mistakes shouldn’t be encouraged but are expected. And acknowledge that some mistakes have the potential to be detrimental to one’s career. Below are some tips and tricks on how to deal with a mistake that you have made so you can minimize the bad in it and maximize the lesson you learned!

The worst part about making a mistake is that you must own up to it. Whether you are the one that can fix it on your own or you must tell your manager… you must own up to it. Last week I sent a flyer to the printer that had a misspelling on it. I did not have anyone proofread it for me and I suffered the consequences. I printed 200 flyers with a misspelling that had to be recycled. The worst part is I sat on the mistake for a few days trying to figure out how to fix it on my own. Whereas if I told my manager right away, I probably would have suffered less guilt and had the new flyers within the same week as the mistake. Therefore tip #1, own up to your mistakes right away and do not try to fix it on your own.

Once you own up to your mistake the next thing to do it to fix it. After I discussed the mistake with my manager, we decided to recycle the incorrect flyers, correct the misspelling and then order new ones.

After making this mistake I have learned to always have someone proofread my work from now on! Always! But also, to take my time while working. It is important to take pride in my work and to make sure I have done the task to the best of my ability before I send it on to the next step.

This site uses Akismet to reduce spam. Learn how your comment data is processed.